So I start this by saying that 16 years ago, I had no clue of what I was doing or going to do.  My wife and I were expecting and this premature, no larger than my 2 hands cupped together bundle presented himself to us.  When you have a child, nothing really prepares you for what will occur and how to handle situations.  You just kinda go with it and pray that it works.

He was about 2 months early and only 5lbs.  Due to his size and weight and the prematurity, there were complications and he needed more time and attention in the hospital.  He was kept in an incubator for a little over a month cooking like a true bun in the oven.  The care unit at Kaiser had nurses waiting on him around the clock.

As parents of a preemie we visited him daily in his little glass house.  Wires and tubes monitoring his vitals with all kinds of sounds and visuals to make any person nervous.  Our hearts heavy with worry that this little guy was not doing so well.  The nurses had difficulty feeding him.  He was struggling with this new world that he was thrust into.  Shallow breathing, sleeping all day and rarely eating made for the prolonged hospital stay.

I held my faith in GOD that he would begin to take to the feeding and begin to grow at a normal rate.  We did our best to arrive at the hospital in time to see him feed and longed for the day to be able to hold him and feed him ourselves.  The nursing staff consisted of these 2 sweet little Filipino ladies.  As they were trying to feed him, gavage as they called it (I think that is how to spell it), they would always say “time to gavage The Baby Perkins”.  This is a phrase that I use to this day.  Little Baby Perkins was a fighter and we eventually brought him home and with joy in our hearts, we loved him with great intent.

I worried as a new dad on whether I was doing things the right way and how I would be able to shape him when I was still learning to be who I am.  I got very little sleep early on.  Always worried if he was breathing at night, would he get trapped in the crib, jump out in the middle of the night.  My nerves settled and I did start sleeping through the night, I even learn how to change a diaper like a pro.

As a father you want your son to be a reflection of you and he loved to laugh and chill with me when he was little.  I taught him how to catch, ride a bike, and now we are preparing to drive.  His grandma taught him is first curse word, but we forgive her, because he has heard worse from music I used to listen to back in the day.  I had to change it up after I realized he was listening to Ludacris a little too closely :-).  He was and still is my road dog although we now have different taste in music.

My shadow has grown over the years.  He has gone through 2 broken arms, more broken bones than I have ever had.  From bad grades to Presidents Awards.  From crooked teeth to straight, thanks to braces.  From not being able to see the chalkboard, to glasses and now to contacts.  From being awkward to playing the bass, electric and acoustic guitar.  From shy to landing a spot with the school choir and heading into Theatre 3 and now looking forward to the big stage to make his worldwide debut as an actor.  From being a follower to being a leader at church teaching kids…I call him “The Kid Whisperer”. He has gone from Bob the Builder Powerwheels and scooters to car shopping.

This kid has grown and grown and grown…and then grew some more, eating up everything in the fridge.  “Everytime I come to the kitchen, you in the kitchen, in the got dang refrigerator.  Eating up all the food.  Allll the chicken.  Allll the pig feet.”  Thank you, thank you, that was my Friday impression.  Now at almost 6′ 3″, he has no indication of ever being a preemie.  He just finished up his sophmore year with a 4.333 GPA and the only pressure he received from us as parents is, open your window and clean your room.  This kid is outstanding to say the least.  He sets his own goals and goes after them.  He has his head on his shoulder the right way.  I offered him some beer and a smoke the other day and he said no…I kid, I kid, but you know what I mean.

All I’m saying is I want to more like him when I grow up.  He is my inspiration, my muse and my heart.  I love him to death and based on him hacking my blog on Father’s day to show me some love, I say he has some love for me as well.  We are now working on writing together and I can’t wait to see what we can accomlish as a family.  GOD has blessed me with a very tall mini me.

I can go on and on, but let me end it with this…GOD has a plan for you.  You are gifted, talented and have a purpose.

Let your dreams guide you and let your heart lead you to be the man that you are destined to be.

Your mom and I love you and are very proud of the person that you have turned out to be.
HAPPY BIRTHDAY Little Baby Perkins! 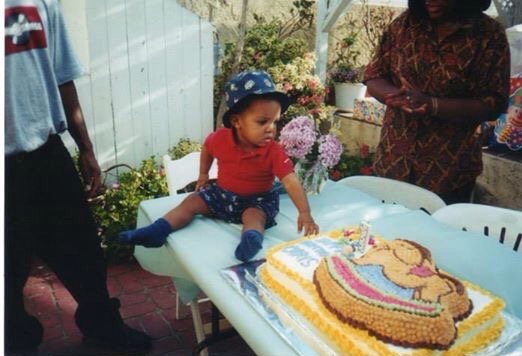